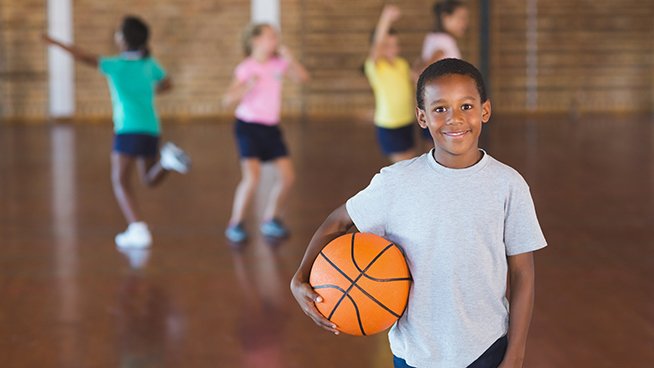 The YMCA is the starting point for healthy kids, and has been for over 100 years! At the Y, kids learn about becoming and staying active, as well as developing healthy habits that they will carry with them throughout their lives. And the benefits go beyond just physical health. Whether it is gaining the confidence that comes from learning to swim or building relationships that lead to teamwork on the basketball court, participating in youth sports at the YMCA is about building the whole child, from the inside, out.

The YMCA has a rich history of contributing to the world of sports and physical education. In fact, did you know that basketball is an invention of the YMCA? Many know that Dr. James Naismith invented the game of basketball. But a lesser known fact is that Dr. Naismith was working for the YMCA International Training School in Massachusetts at the time (this location later became the YMCA Springfield College).

Time for a quick history lesson…

Naismith was responsible for a challenging group of boys who had become disinterested in the usual sports and exercises. In fact, three other instructors prior to Naismith had tried and failed to engage with this group of boys. At the same time, Naismith and his fellow instructors were tasked by their Director to invent a new game which would be easy to learn and that could be played indoors for physical activity during the winter months.

This was a tall order, but Naismith was determined to invent a game for his class while managing their rough-and-tumble nature. He realized that if players can’t run with the ball, there is no need for them to tackle. Going further, he noted in his journal that, “if the goal was horizontal instead of vertical, the players would be compelled to throw the ball in an arc; and force, which made for roughness, would be of no value.” The last stroke of genius came when Naismith thought to raise the goal above the players’ heads to make defense more difficult.

The first time basketball was played was on December 21, 1891, and the boys used two old peach baskets as goals. The game was an instant success, and the game quickly spread throughout the YMCA system. The rest is history. Basketball became an Olympic sport in 1936 and today it is played by millions all the world over.

The YMCA continues to keep the sport alive in our South Florida YMCA basketball leagues. And basketball is just one of many of our youth sports programs. Come check out all our offerings and get registered today!

Kick Up The Fun With Soccer For Kids At The Y!